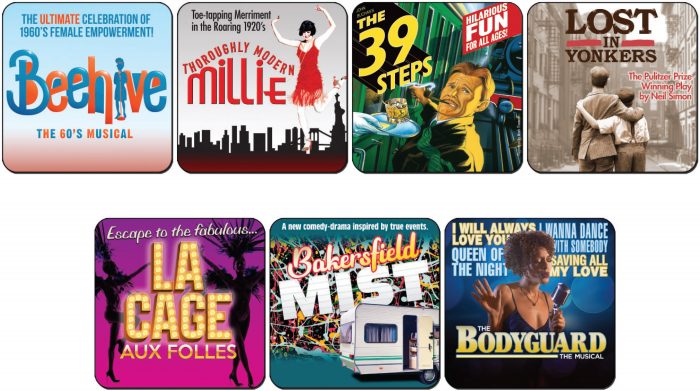 Riverside Theatre, led by Producing Artistic Director/CEO Allen D. Cornell and Managing Director/COO Jon R. Moses, is delighted to announce its 46th Anniversary Season for 2019-2020. Building on the success and acclaim the theatre has attained nationwide over the last few years, Riverside is proud to present a magnificent season of music, comedy, and drama.

“Each season we strive to produce shows that will excite our audiences,” says Mr. Cornell. “The thought process behind show selections is centered on the goal of putting our own stamp on popular works that we believe our audience needs to see. With those thoughts in mind, we hope our patrons will be as excited as we are to see the shows that will comprise the 2019-2020 season.

“The season is spread across many drawing boards as we continue to plan these productions, but we invite theatregoers to be witness to the magic that happens when what begins with a pencil and inspired imaginings becomes full blown life on stage!”

The season begins in October with a musical journey through the 60’s with Beehive followed in January by the tap-happy, tuneful Thoroughly Modern Millie. A tribute to American playwright Neil Simon follows with his Pulitzer Prize-winning play Lost in Yonkers in February. Two very popular musical hits – the madcap La Cage aux Folles and the romantic thriller The Body Guard – conclude the season on the Stark Stage while two comedic plays fill the Waxlax Stage season – the uproarious The 39 Steps in January and very funny Bakersfield Mist in March.

Season ticket packages are now available for 3, 4, 5 or more productions on the Stark and Waxlax Stages. For more information on prices and subscription options, call the Box Office at 772-231-6990 or online at http://www.riversidetheatre.com.

An exuberant jukebox celebration of the rockin’ women who made the 60’s memorable, Beehive transports audiences on a musical journey showcasing some of the ladies who made the era’s music so special. From Leslie Gore to Janis Joplin, from the Shirelles to the Supremes, from Aretha Franklin to Tina Turner, the show features over forty classic chart-toppers that will have audiences dancing in the aisles reliving one of music’s greatest decades.

Winner of six Tony® Awards, including Best Musical, Thoroughly Modern Millie is a high-spirited  musical romp that takes you back to the height of the Jazz Age. When Millie Dumont arrives in New York City from Kansas, she quickly finds an exciting new world filled with frisky flappers, dashing leading men and a villainess audiences love to hate. Based on the 1967 film starring Julie Andrews and Mary Tyler Moore, Thoroughly Modern Millie is a perfect evening of explosive tap numbers and hilarious situations.

Written by Neil Simon and set in Yonkers, New York, in 1942, Lost in Yonkers is the Tony® Award and Pulitzer Prize-winning drama about two brothers who are sent to live with their stern German grandmother after their mother’s death. Placed there by their traveling salesman father, the boys find themselves contending with new realities – a childlike aunt, a gangster uncle, and a dad who is never there.

Winner of multiple Tony® Awards – Best Musical in 1984 and Best Musical Revival in 2005 AND 2010, La Cage Aux Folles remains one of Broadway’s all-time biggest hits. After twenty years of un-wedded bliss Georges and his male partner, Albin, get the thrilling news their son is getting married. The only problem is the bride-to-be is daughter of a bigoted, straight-laced politician dedicated to ridding St. Tropez of drag clubs like the one owned by George and starring Albin. Featuring some of Jerry Herman’s greatest showtunes, La Cage aux Follies is madcap merriment.

Based on the smash hit film, the breathtakingly romantic thriller follows Secret Service agent turned bodyguard, Frank Farmer, when he is hired to protect superstar Rachel Marron from an unknown stalker. Featuring songs made famous by Whitney Houston, The Bodyguard includes “Queen of the Night,” “So Emotional,” “One Moment in Time,” “Saving All My Love For You,” “I Have Nothing,” and one of the bestselling songs of all time, “I Will Always Love You.”

Mix a Hitchcock masterpiece with a juicy spy novel, add a dash of Monty Python and you have The 39 Steps, a fast-paced whodunit for anyone who loves the magic of theatre! Winner of two Tony® Awards, the play is filled with nonstop laughs, over 150 characters (played by four actors), a plane crash, handcuffs, missing fingers, and some good old-fashioned romance.

Inspired by true events, this hilarious new comedy follows Maude, a fifty-something unemployed bartender, who buys a painting for a few bucks from a thrift store. Despite almost trashing it, she’s now convinced it’s a lost masterpiece by Jackson Pollock worth millions. But when world-class art expert Lionel Percy flies over from New York and arrives at her trailer home in Bakersfield to authenticate the painting, he has no idea what he is about to discover.