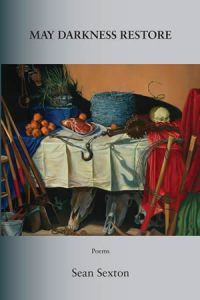 Friday, March 1 is not only First Friday in downtown Vero Beach, but it is also an opportunity to hear Sean Sexton share readings from his newest book “May Darkness Restore.”   Sean will be doing “ Readings” free to the public at Laura (Riding) Jackson Foundation Writing Center at 1914 14th Avenue as part of the First Friday Art Walks.  You will not want to miss this!

This is his second volume of poetry, (the first: Blood Writing, published in 2010 by Anhinga Press), written in late middle age, drawn upon his life and experience as an artist, writer and cattleman living and working in Southeast Coastal Florida, on his family’s Treasure Hammock Ranch. He has been involved in Florida’s cattle industry since he was a child taking care of 350 brood cows on 700 Acres of Land the family has held for 76 years. The poetry embraces mortality and the cycles of life, connections to family, the elements, vagaries of the muse, balance of manual labor and artistic realization and the ongoing wonder and difficulty of leading a pastoral life in the new millennium.

The Poet, Alfred Corn, says: “Poetry dealing with this vital subject is scarce, which is one reason we welcome Sean Sexton’s work. Another is that it embodies, in Keats’s words, “the holiness of the heart’s affections,” realized with originality, economy, and skill. These are poems for which we can feel true gratitude.

Sean Sexton was born in Indian River County and grew up on his family’s Treasure Hammock Ranch. He divides his time between taking care of a 700 acre cow-calf operation, painting, and writing. He is married to artist, Sharon Sexton, and they live on the ranch in a house they built on the ranch. Sexton has kept daily journal-sketch and writing books since 1973. He received an Individual Artist’s Fellowship from the State of Florida in 2000-2001. He is author of Blood Writing, Poems, Anhinga Press, 2009, The Empty Tomb, University of Alabama Slash Pine Press, 2014, and Descent, Yellow Jacket Press, 2018. May Darkness Restore, Poems, Press 53 is due out in early 2019. He has performed and presented at the National Cowboy Poetry Gathering in Elko, Nevada, The Miami Book Fair International, O’ Miami, and Other Words Arts Literary Conference in Tampa, FL. On Sept 1, 2016, He became the inaugural Poet Laureate of Indian River County.

He is represented in art collections throughout the US and is featured in a selected group exhibition, Lay of the Land, The Art of Florida’s Cattle Culture at the Albin Polasek Museum in Winter Park, FL, Dec 11, 2018—April 14, 2019.