“I’ve chosen to sculpt ‘real life’ because in our busy society – filled with so much technology and idle distraction – it’s easy sometimes to forget the simple things that give us pleasure.  If we open our eyes, life is marvelous.  The human spirit triumphs, if only for moments in a day.  I try to have my work call attention to those moments.” – Seward Johnson

Beginning January 3, visitors to McKee Botanical Garden may be startled by the addition of bronze sculptures so life-like and convincing in appearance that they may be mistaken for actual human beings. These sculptures are the work of American artist Seward Johnson, whose talents will be showcased in the Seward Johnson Sculpture Exhibition on exhibit at McKee through April 27. 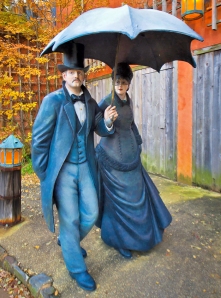 The Seward Johnson Sculpture Exhibition will feature twenty life-size installations representing two of Johnson’s sculpture series: Celebrating the Familiar and Beyond the Frame. Each bronze casting reflects the realism and meticulous attention to detail that are the hallmark of Johnson’s work.

Since beginning his artistic career as a sculptor in the late 1960’s, more than 450 of Johnson’s bronze figures have been featured in private collections and museums in the U.S., Canada, Europe and Asia as well as in the public realm. Johnson has several publicly sited works in New York , Washington DC, Chicago , Dallas , Houston and Los Angeles . In Florida his sculptures have appeared in such locales as Lakeland , Sarasota and Key West .

Seward Johnson is most widely known for his sculptures depicting ordinary people engaged in every day activities. His desire to highlight the mundane in his Celebrating the Familiar sculpture series has brought a unique voice to the world of art in public spaces. Installations at McKee will portray individuals performing various activities in the Garden, from fishing in the Main Pond to relaxing with a good book in the Greeting Area. There will be children playing in the meadow and a family engaged in an impromptu photo shoot. Each sculpture brings an added dimension to life at McKee.

Johnson’s Impressionist-inspired series entitled Beyond the Frame consists of elaborate tableaux that allow viewers to walk into the scenes of Impressionist paintings by artists such as Manet, Renoir and van Gogh, among others. In his three-dimensional interpretations, Johnson re-creates his subjects in the same color palette and context of the original painting, but in true-to-life scale. The exhibition at McKee will contain eight sculptures from this body of work including A Turn of the Century inspired by Renoir’s “A Dance at Bougival,” La Promenade modeled after Caillebotte’s “Paris Street, Rainy Day” and Monet, our Visiting Artist, a playful depiction of the beloved artist painting one of his favorite subjects – waterlilies.

In addition to his contributions as a sculptor, Johnson has had a significant impact on the art community, creating the Johnson Atelier Technical Institute of Sculpture and the renowned art park Grounds For Sculpture in New Jersey . He is the past president of the International Sculpture Center , was the publisher of a science magazine, and started an off-Broadway theater in New York . He also served as president of a large oceanographic research facility.

“Seward Johnson is one of the most widely recognized sculptors of our time, known worldwide for his highly-detailed bronze sculptures,” stated McKee Botanical Garden Executive Director Christine Hobart. “We are thrilled to host the Seward Johnson Sculpture Exhibition here at McKee and to share these unique creations with our visitors.”

In addition to daily viewing, visitors will have three opportunities to see the sculptures specially illuminated for nighttime viewing during McKee’s Seward Johnson Twilight Nights events scheduled for January 17, February 14 and March 7 from 6:00 to 8:00 pm. Each event will include a live jazz performance by The Coffee Beans from 6:30 to 7:30 pm on the Garden Patio.

McKee Botanical Garden is a 501(c)(3) nonprofit organization whose mission is to nurture and enhance a historic garden in a unique tropical setting for the education, enjoyment and enrichment of all.  McKee Botanical Garden is located at 350 US Highway 1 in Vero Beach . Admission rates are $12 adults, $11 seniors and $5 children ages 3 to 12.  Admission is free for members and children under 3. Hours of operation are Tuesday through Saturday, 10 a.m. to 5 p.m. and Sunday, noon to 5 p.m.  The Garden is closed Mondays. For more information, call 772-794-0601 or visit http://www.mckeegarden.org.