Editor’s note: In a story published Dec. 1 on Sunshine Law violations by local elected officials, TCPalm.com reporter Lisa Broadt quoted Indian River Shores Mayor Brian Barefoot as claiming his Sunshine Law violation, a 2014 charge for which he pleaded no contest and paid a $200 fine, resulted from a setup. “It was initiated by this guy who was advocating for Vero Beach, and he basically set myself and the other councilman up.”

In truth, the email communication between then Councilman Richard Haverland and Barefoot resulted when Haverland wrote Barefoot to seek input in answering a question put to him by a reporter. To be sure, the reporter never asked Haverland to seek input from Barefoot, or from anyone else.

Below is the story first reporting on email communication between Haverland and Barefoot for which both men pleaded no contest to Sunshine Law violations.

Editor’s Note:  This report is based on email documents provided by the Town of Indian River Shores in response to a public records request from Inside Vero.

In an April 14 email to Indian River Shores Town Manager, Robert Stabe, Councilman Dick Haverland urged that a special meeting on the hiring of an attorney to handle the Town’s lawsuit against the City of Vero Beach be scheduled for “an extremely inconvenient time — say 7 or 7:30 am.”

“My guess is that no one would notice,” Haverland wrote, “and if they did, they wouldn’t likely attend.”

Haverland also suggested public notice of the meeting be “very unspecific as to the agenda item, like ‘attorney retention.'”  That way, Haverland suggested, the meeting “would have a chance of escaping notice.”

In an April 7 email to John McCord, which was copied to Bill Grealis, Haverland addressed the Town’s process for interviewing and selecting a law firm to handle its lawsuit again Vero Beach.  “I know you two are driving the process. Just want to have a general idea of when we might be thinking we would interview the leading candidate(s).”

In reply, McCord made reference to a meeting to be held the following day to be attended by “Dick, Bill and I…with Cadden (Town Councilman Tom Cadden).

If McCord’s April 7 email referred to Dick Haverland, and if the meeting took place with Cadden also in attendance, Haverland and Cadden may well be in violation of the Florida Sunshine Law.

McCord’s April 7 reply to Haverland also indicated Grealis was expecting to “hear from FPL shortly on their suggestions.” If Florida Power & Light has in any way encouraged and assisted the Shores in suing Vero Beach, the company may have some explaining to do.

In a March 6 email to Stabe, Haverland wrote, “I know John McCord and Bill Grealis have been in regular contact re. the FPL status…I know John has had experience with breaking away from utilities…and also has a good friend in very high office in Florida. I hope he will be included in ‘the loop.'”

Haverland concluded the March 6 email, “The short term issue: is there any reason not to make our intentions public?  My guess is that the day we hire an attorney, our intentions will be known.”

In another candid email dated April 24, Haverland wrote McCord reporting on a Shores Town Council meeting in a way that suggests an effort to conceal the Council’s plans to sue Vero Beach.

Haverland wrote, “You wouldn’t believe it.  When the hiring the lawyer came up, Brian (Barefoot) presented it in a ‘vanilla’ fashion so as to not let anyone know.  It was already to be voted upon, and Weick (Gerry) said, ‘Is this to hire the electric lawyer?’  Brian said it could cover a number of things.  Looks like Weich wasn’t in on the loop.”

Just last month, Haverland and Barefoot carried on an email correspondence about the Town’s claimed “damages” of $2 million a year as a result of what Town leaders have argued are Vero Electric “unreasonable” rates.

Haverland concluded the email exchange with Barefoot writing, “Great. The more Mark Schuman (sic) is wrong, the less credibility he will have.  He has a pretty close following, including Winger and Graves.”

In a July 18-19 email correspondence between Haverland and Inside Vero editor, Mark Schumann, Schumann wrote, “Can you share with me how the Town Council concluded the rate differential at $2 million.  Is this simply a number provided by FPL?”

Haverland replied, “I will attempt to find out for you what the source of that information was.”

After receiving Mayor Barefoot’s explanation on July 21, Haverland responded to Schumann, writing, “I am not at liberty to disclose the source of the number.”  See full correspondence below. 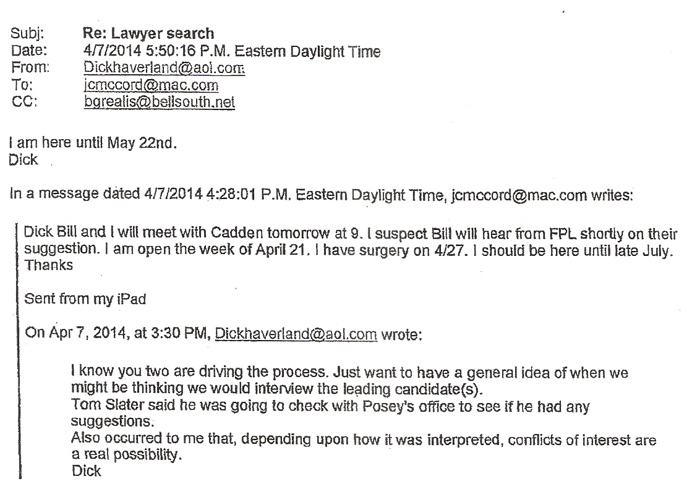 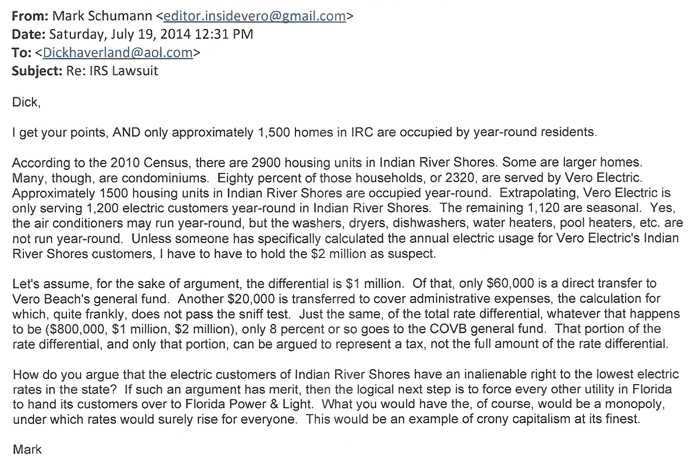 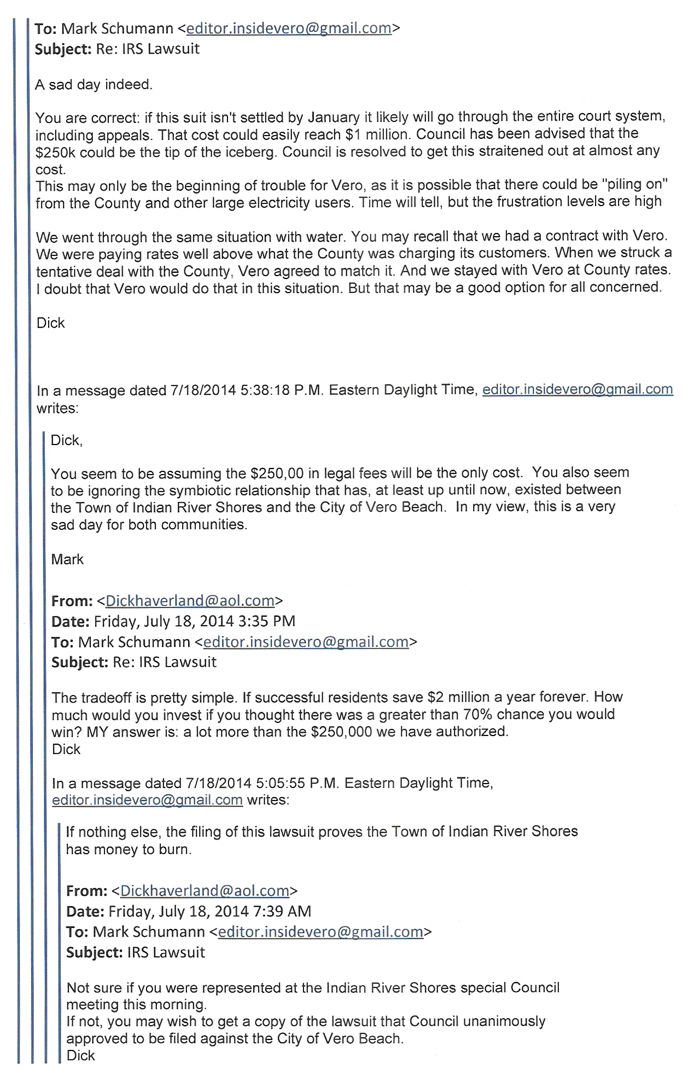