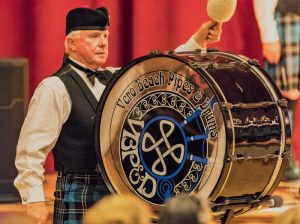 The Vero Beach Pipes and Drums will be holding an annual fundraiser concert at 7:00pm on Saturday, November 10, 2018, at First Presbyterian Church, 520 Royal Palm Boulevard in Vero Beach. New this year, the concert will include performances by the Vero Beach High School Celtic Club string ensemble. There is no ticket needed; a $10 donation is suggested at the door.

Emri Stenn, a graduate of Vero Beach High School, will also present a solo fiddle performance. Stenn is entering his third year of study at the University of Limerick in Ireland, where he is working toward a Bachelor’s Degree in Irish Music. He started the Celtic Strings Club during his senior year at VBHS. He said, “My intent was to create a club where I could teach students how to play fiddle music in general. This included some Scottish, old time, and Irish. Since I specialize in Irish music, I tended to lean more towards the Irish and Scottish tunes and that led to the Celtic name.” During Stenn’s study in Ireland, current VBHS student Evan Robinet has been in charge of the group.

Proceeds from the concert help send promising students to the North American Academy of Piping and Drumming as well as the Balmoral school. They will also assist the band with bringing in consultants and the purchasing of uniforms, musical instruments, and educational materials. By supporting the Vero Beach Pipes and Drums in their fundraising efforts, donors also help the band in its goal of promoting Scottish and Celtic culture and values throughout the community.

The Vero Beach Pipes and Drums is a community-based regimental Scottish Pipe Band consisting of bagpipers and drummers from throughout the Treasure Coast. Their goal is to perform, entertain, educate, and bring Scottish culture and values to the community. Through education, practice, performance, and competition, the Vero Beach Pipes and Drums aim to enhance their community through standards of excellence at all levels. Under the direction of Pipe Major Jacob Craig, Drum Major John Thompson, and Pipe Sergeant Jack Anderson, they are  a fully accredited 501(c)(3) nonprofit organization embracing Scottish culture as well as traditional dress and values.

To find out more about the band or receive information on how you can have them perform at your upcoming event, contact Jacob Craig, Pipe Major, at (772) 696-2546, vbpipesdrums@gmail.com, or visit http://www.verobeachpipesanddrums.org.