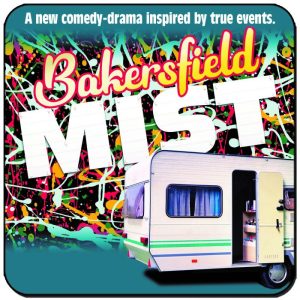 Inspired by true events, this hilarious new play follows character Maude Gutman, a fifty-something unemployed bartender, who buys a painting for a few bucks from a thrift store. Despite almost trashing it, she’s now convinced it’s a lost masterpiece by Jackson Pollock worth millions. But when world-class art expert Lionel Percy flies over from New York and arrives at her trailer home in Bakersfield to authenticate the painting, he has no idea what he is about to discover.

What is the true story on which the play is based?

In 1992, retired California trucker, Teri Horton, went searching for a gift to cheer up a friend. Horton thought she’d found the perfect gag gift – a big painting of nothing but squiggles, swipes and drips – and paid five dollars for it.

The friend hated the piece and refused to put it in her trailer at which point Horton added it to a garage sale she was having. When an art teacher passed by, she tells Horton, “you might have a Jackson Pollock painting here.” Horton’s response was, “who the (expletive) is Jackson Pollock?”

When Horton discovers her artwork might be a $50 million piece of artwork, she contacts Thomas Hoving, director of the Metropolitan Museum of Art in New York City, to come and authenticate the painting. One of the difficulties is that the artwork is unsigned.

A 2006 documentary, Who the #$% Is Jackson Pollock?, chronicles Horton’s efforts to have the art world agree that her thrift-store bargain was an original work by a master artist.

Although no art expert would authenticate the piece, Horton received offers of up to $9 million for the painting, but never sold as she was looking for a “fair price.” Horton passed away in July 2019 still in possession of the artwork.

Playwright Stephen Sachs takes this true story and turns it into an uproarious and thought-provoking play about the collision of class cultures and attitudes.

Riverside’s production of Bakersfield Mist will be directed and scenically designed by Allen D. Cornell and stars Kim Cozort Kay as Maude Gutman and Graham Smith as Lionel Percy.

Bakersfield Mist performs March 24 – April 12, 2020 on the Waxlax Stage at Riverside Theatre. Tickets are $65. Tickets can be purchased by calling the Box Office at 772-231-6990 or online at http://www.riversidetheatre.com.

Performances are Tuesdays, Wednesdays, and Thursdays at 7:30pm; Opening Night (the first Tuesday performance), Fridays, and Saturdays at 8pm; with matinees on Wednesdays, select Thursdays, Saturdays and Sundays at 2pm.

Comment - Please use your first and last name. Comments of up to 350 words are welcome.