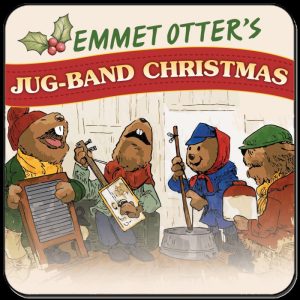 Riverside Theatre for Kids presents the area premiere of the holiday classic, Emmet Otter’s Jug-Band Christmas, in a live stage show on December 6-8, 2018.

Written by Russell Hoban and illustrated by Lillian Hoban in 1969, the story was first published by Parents’ Magazine Press in 1971 and was adapted into a beloved television special by Jim Henson using ingenious puppets and music by Paul Williams.

The story tells of Emmet Otter and his Ma, who each want to buy a wonderful gift for the other for Christmas. Though poor, they hear of a talent contest in the nearby town, and separately decide to enter to buy nice presents for each other—a nice guitar for Emmet, or a piano for Ma. However, in a twist on The Gift of the Magi by O. Henry, they take interesting steps to win the talent contest and its cash prize.

In 1977, Muppet creator Jim Henson produced a one-hour television adaptation of the story filmed in Toronto. The special premiered on Canadian television in 1977 and in the U.S. the following year. The special later aired on ABC and Nickelodeon in the 1990s. The special utilizes a number of different puppetry methods including hand puppets. However, other characters were represented by marionettes and utilized Japanese Bunraku puppet theatre techniques. This is also one of the first Muppet productions to use radio control puppet effects.

“We are incredibly excited for this,” says Kevin Quillinan, Director of the production and Director of Theatre Education at Riverside. “We are the second company to perform this adaption since its premiere in 2008 at the Goodspeed Opera House. Our musical will include all the silly characters and heartwarming songs from the TV special, along with fantastic new songs Mr. Williams added to this adaptation.”

The stage version was developed by the Jim Henson Company and Goodspeed Musicals. With Paul Williams returning to write four new songs for the show, it played the Goodspeed Opera House in East Haddam, Connecticut from December 7, 2008 through January 4, 2009. The show returned to Goodspeed for the 2009-2010 season and held a reunion concert in 2015.

Tickets are $10 and can purchased by calling the Riverside Box Office at 772-231-6990 or online at www.riversidetheatre.com.