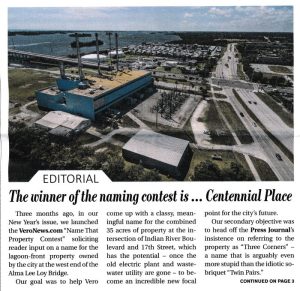 Editor’s note: If you read the previous commentary (following these comments) on the Indian River Shores weekly’s arrogant “contest” to rename Vero’s Three Corners to Centennial Place because Three Corners “…is arguably even more stupid than the idiotic sobriquet ‘Twin Pairs’,” you probably agree our community needs no ‘down the nose’ advise from a proven critic of our community. However, Vero’s mayor, Val Zudans, agrees with the IR Shores resident that Centennial Place is the proper name for this property. At least that is what he claims in an article on the inappropriately named Facebook site, “Indian River Patriots.” In his article, Zudans claims the three valuable properties are “for industrial use only.” Really?

In case you didn’t notice, the Indian River Shores weekly held a ‘contest’ to rename Vero’s “Three Corners.” Apparently the editor felt Three Corners was “a name that is arguably even more stupid than the idiotic sobriquet ‘Twin Pairs.’ (Do the words ‘stupid’ and ‘idiotic’ even belong in the same sentence as ‘sobriquet?’)

While I am sure Vero Beach residents appreciate the efforts of his “90 or so local residents” to come up with a name he believes Indian River Shores residents would approve of, it should be noted that ultimately the citizens and City Council of Vero Beach are responsible for making that decision, not an editor and his neighbors north of town.

I would also note that the Indian River Shores weekly has consistently denigrated many decisions made in Vero Beach and the Indian River County that surrounds them. If this publication is the voice of Indian River Shores, it seems to be a somewhat negative voice. Since many Shores residents are true friends and supporters of Vero Beach, they may want to advise the editor in question to more accurately reflect their views and take his bitterness out at a gym.